A Danish-Norwegian project aimed at building what will be the world’s largest and most powerful hydrogen-fuelled ferry has applied for EU funding. The plan is to start operating a Copenhagen-Oslo service by 2027

Several shipping and energy firms have banded together to build a ferry capable of transporting 1,800 passengers between the two Scandinavian capitals. The vessel, which will be named Europa Seaways, will be powered by zero-emission hydrogen fuel cells.

The hydrogen will be produced in Denmark using offshore wind power, meaning it will be ‘green hydrogen’ rather than grey or blue, which involves using fossil fuels in the production process.

According to the project’s initial calculations, the ferry would avoid 64,000 tonnes of CO2 emissions every year, the same as taking more than 13,000 passenger cars off the road.

Europa Seaways will also be able to carry vehicles, either 380 cars or 120 trucks, on the roughly 48 hour-long roundtrip. To achieve this feat it will be powered by a 23-megawatt fuel cell, which will dwarf all existing propulsion systems. 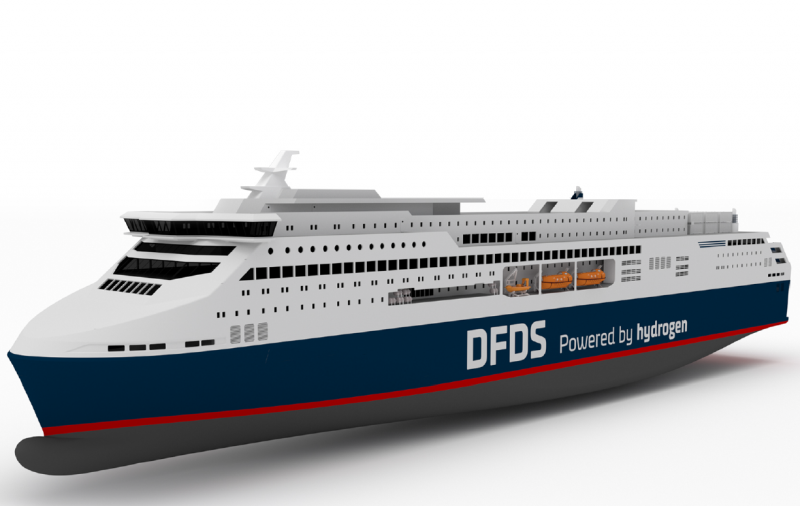 “The largest fuel cell systems today produce only 1-5 MW, and the development of such large-scale fuel cell installations for an electric ferry is a monumental task,” said Torben Carlsen, CEO of ferry firm DFDS, who will operate the vessel.

“We can only succeed in partnerships with companies that together can muster some of the globe’s finest expertise in design, approval, building, financing and operation of innovative vessels,” he added.

DFDS insisted in a statement that because no such vessels exist yet, public money will be required to get the ship in the water. The project has applied for support from the EU’s €10 billion-strong Innovation Fund.

That fund, which targets “highly innovative technologies and big flagship projects”, is fed by payments from the bloc’s carbon market, the Emissions Trading Scheme, and the first calls for project tenders were launched in November.

According to a draft of the European Commission’s Sustainable and Smart Mobility Strategy, which is due to be published on Wednesday (9 December), the EU executive wants to see zero-emission vessels in operation by 2035.

Given that DFDS aims to start services in 2027, Europa Seaways could smash that target and provide other firms with valuable development data.

Ferries are seen as a good entry point for zero-emission vessels before a full-scale up to massive container ships can happen, in the same way that buses have embraced battery and hydrogen power ahead of trucks.

“In order for the industry to reach the International Maritime Organisation’s 2050 ambitions it shall need to transition to zero carbon fuels, this is a complicated pathway not just in terms of technology, but also infrastructure,” said Charles Haskell of Lloyd’s Register, a shipping services company involved in the project.

Danish power firm Ørsted is also going to play a major role, as it will help provide the green hydrogen fuel. It has already announced plans to build new facilities geared towards providing green fuel for heavy transport, planes and ships.

“If regulators are willing to put the right framework in place to enable the demand and supply side of sustainable fuels, Danish companies are willing to invest in large-scale Power-to-X-projects,” said Ørsted VP Anders Nordstrøm.

Clean mobility NGO Transport & Environment released a study on Monday (7 December) that insists hydrogen “will be wasted” on road transport and should instead be earmarked for aviation and shipping.

“Our study shows the aviation and shipping sector alone would create a sizeable, new market for green hydrogen, helping to scale the technology and pave the way for zero-emissions shipping and flying,” said T&E’s Geert De Cock.

“The choices we make today could have massive repercussions on power demand in the future. For example, running just a fraction of vehicles on e-fuels would require offshore wind turbines covering all of Denmark. That doesn’t make any sense,” he added.